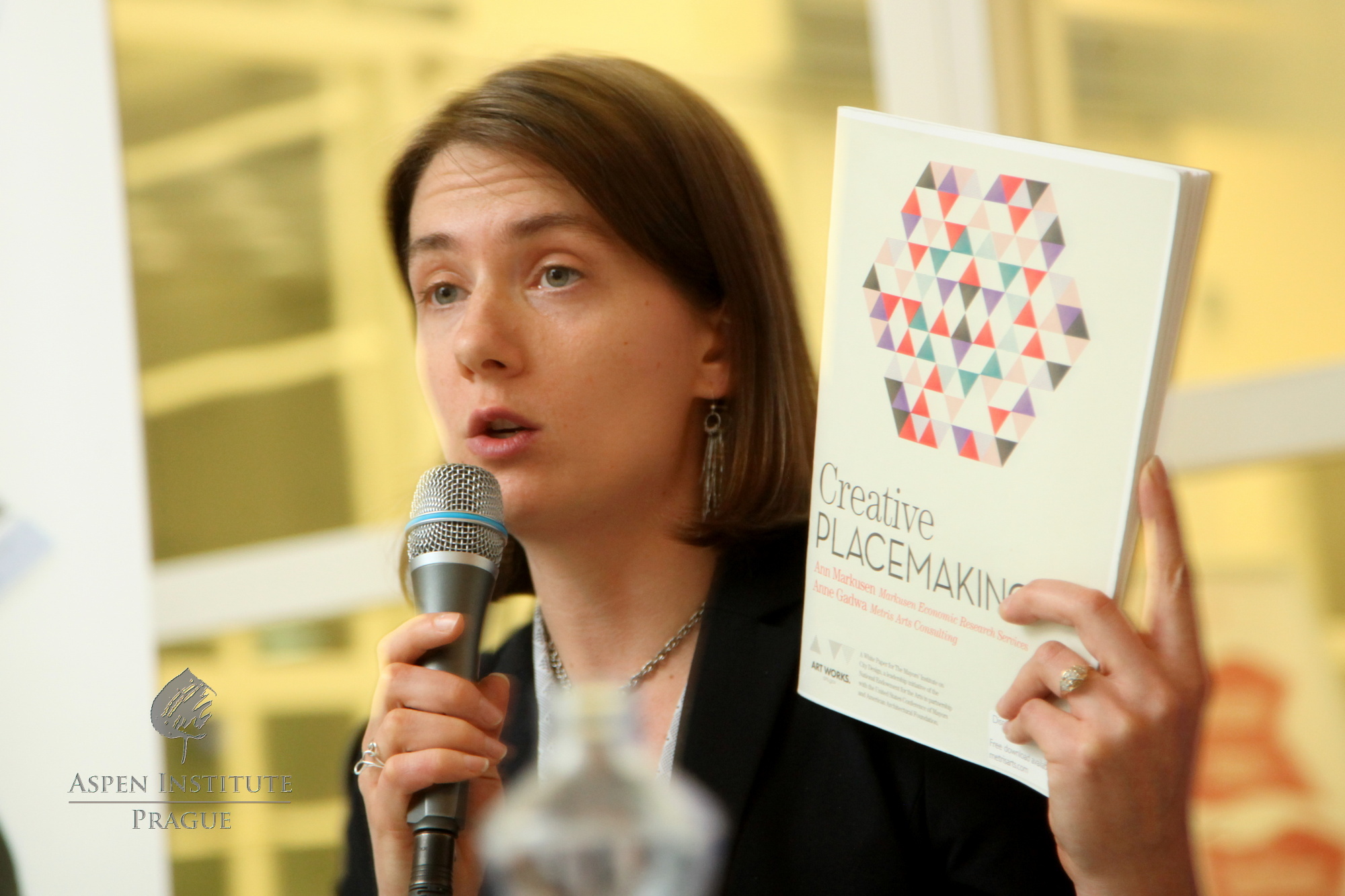 In 2009/2010, I caught an incredible break. I had recently decided to hang out my shingle as an arts and urban planning consultant. A former choreographer/arts administrator, I was just 29 years old, had a newly minted masters of urban planning in hand, and a rock star of a mentor: Ann Markusen. The upper echelons of the National Endowment for the Arts tapped Ann to write a white paper. It was to underpin a new, flagship grantmaking program on how arts and culture could be harnessed for community revitalization and livability. When she asked me if I‚Äôd like to work on the project, I unequivocally said yes. In many ways, that white paper has been and remains my professional calling card. It allowed me to build Metris, a business now nearly 10-years strong, and I am incredibly proud of our body of work. When giving talks around the country, folks introducing me would frequently go off-script from my official bio and ad-lib ‚Äúshe, literally, wrote the book on creative placemaking.‚Äù

By 2016, I started to notice a dramatic shift. That summer Carlton Turner delivered a powerful keynote at LISC‚Äôs creative placemaking convening in Providence, RI. During the Q&A, Liz Hale, then LISC‚Äôs director of development, asked Carlton if creative placemaking was a problematic term. ‚ÄúAbsolutely!‚Äù was his reply. I shrank in my seat. That same weekend, Prof. Andrew Zitcer shared his research from Philadelphia, later published in the Journal of Planning and Education Research. He asked nearly 30 Philly stakeholders to define creative placemaking and discuss its relevance to their practice. He documented that ‚Äúpractitioners have many concerns about creative placemaking, ranging from the term itself to the role of artists in funded projects, to the potential for creative placemaking to usher in gentrification and displacement.‚Äù That fall the Cultural Researchers‚Äô Network listserv hosted a healthy debate where prominent researchers, consultants, and a funder critiqued and defended the term and practice.

I remember awkwardly thanking Carlton after his keynote for calling out the ways in which creative placemaking was problematic. I said that I wanted to do my part to acknowledge and take responsibility for its warts. He noted that as one of the architects of the term, I had an important soapbox from which to voice those critiques.

Context does not excuse, but helps situate, our blind spots. The creative placemaking framework was born out of the Great Recession. Folks at the NEA joined their counterparts at other federal agencies trying to find place-based solutions for people and communities. Given that many, many people were underwater on their mortgages, they could not just up and leave for greener pastures. In this case, people couldn‚Äôt follow jobs. To try to help people, one had to try to lift up entire communities. By 2016, the pain of the Great Recession was fading from memory. With the murders of Trayvon Martin, Michael Brown, Tamir Rice, Tanisha Anderson, Mya Hall, Walter Scott, Freddie Gray, and far too many more, the Movement for Black Lives was on the ascent. Setting the tone for the nonprofit arts world, Grantmakers in the Arts released its equity commitment in 2015. Equity was in the air. (Amen!) Creative placemaking‚Äôs emphasis on place, at the perceived short-shift of people, was increasingly interpreted somewhere on a spectrum between tone-deaf and nefarious.

Labeling the above ‚ÄúAnne Gadwa Nicodemus‚Äô list,‚Äù is, in some ways, a misnomer. I want to own the warts and must give credit to the fact that others have powerfully made these critiques before. As early as 2013 Roberto Bedoya‚Äôs ‚ÄúPlacemaking and the Politics of Belonging and Dis-belonging‚Äù served as a clarion call for point #1 and spurred healthy shifts in funders and practitioners‚Äô orientations. He and many practitioners now favor creative placekeeping, as an alternative term.

How do I relate to these warts? More on that in a moment. A core value at Metris is to amplify the voices of those closest to the work. So, I‚Äôd first like to offer some more verbatim critiques voiced by artist and culture bearer-practitioners. (Big shout out to Alternate ROOTS for its recent multimedia exploration of creative placemaking, Creating Place, from which these excerpts are drawn).

Reflecting on change in inner-city neighborhoods in Dallas that were traditionally of color, curator/cultural journalist/artist Vicki Meek writes:

‚Ä¶ a capitalist appropriation of what have essentially been the survival strategies of our people ‚Äì and others ‚Äì who know what it is to make a place out of no place, to make a way out of no way. It‚Äôs not just what we do, its‚Äô who we are. Whenever I smell fresh tomatoes from the garden, or bite into a fresh cucumber, with just the right amount of salt, or see 10-10-10 in the hardware store, I am reminded.

In a podcast, theatre artist Kim Maeda reflects on her performance piece Bend and argues that one must make space for deep healing (an ongoing process) to move forward:

In my mind, it‚Äôs about places that are lost- which in some ways seems like the opposite of creative placemaking, but maybe not. ‚Ä¶ It‚Äôs about questioning what is home ‚Ä¶ understanding how complicated that is especially when the place you called home doesn‚Äôt want you anymore or doesn‚Äôt exist anymore.

Now, what do I make of these warts? How do I relate to them? That‚Äôs a complicated question that feels quite high stakes, considering how closely intertwined my and Metris‚Äô professional reputation is with creative placemaking. (No wonder it‚Äôs taken me two and a half years to write this.) Some of these critiques made it in to an intro chapter for the newly published Routledge anthology Creative Placemaking: Research, Theory and Practice, on which Ann Markusen graciously made me a co-author, again. Given the opportunity to more actively shape the overarching themes of that chapter, I would have emphasized them even more.

The main way I relate to the warts is by trying to lift up ways of approaching this work that I think are essential. The term is problematic. It‚Äôs evolved. It‚Äôs still a fuzzy concept. How can we elevate elements of practice (and, yes, the practices pre-date the term) so that the work speaks for itself?

On the speaking circuit, I engaged in dialogue with audiences around the country about these issues. I like to talk about belonging and riff on the question, ‚ÄúWhere are you from?‚Äù Is it where you live now? Where you were born? Where your grandparents are buried? When can you claim a place as your own? When does it claim you back?

Vintage photos of me splashing around mud puddles with my cousins in Long Island, NY, usually inspires a collective ‚Äúaww,‚Äù from the audience. I like to show an antique, yellowing map that hung over the mantle of the farm that was in my family for four generations and juxtapose that with a photo of a commercial strip development on Main Street in Smithtown (a mile and a half from the farm) that could be Anywhere, USA.

I argue that the ability to influence change in your community, so that it‚Äôs not just the inevitable, invisible economic hand shaping decline or growth, is key to belonging. When you can shape a place, you can claim it. Arts and culture are critical, under-utilized tools to give people agency to shape their place‚Äôs future and build more distinctive communities. To help them belong.

I also acknowledge that arts and culture are not neutral or a universal panacea.

Yes, arts and culture can be tools that empower communities and help cultivate belonging. But they also can be used as a wedge to alienate individuals and groups of people (whether they have less money or education or are of a different race).

I like to talk about gumbo. Arnaudville, Louisiana‚Äôs artist George Marks introduced it to me. Gumbo combines ingredients and culinary practices from several cultures: West African, French, Choctaw, Spanish, German, and Italian. Unlike the ‚Äúmelting pot‚Äù metaphor, which for me always conjures up an image of cheese fondue, in gumbo, one can taste and recognize each distinctive element and the beauty is that the whole is more delicious than any of these parts in isolation. I started throwing down the gauntlet to would be creative placemakers: ‚ÄúBe like gumbo!‚Äù Shape community change, but to do so via celebrating and preserving the range of cultures in your place.

The last time I was in Louisiana (April 2018), I learned another lesson. I first attended the American Planning Association conference in New Orleans, which featured debates about how planners should deal with Confederate monuments. With the nation‚Äôs first lynching memorial about to open, it launched powerful discussions at breakout tables about shaping and controlling narratives and memory. Who gets to write history? Coincidentally, as my trip segued to Arnaudville and Lafayette where I delivered a keynote, I learned from George that some White Cajuns claim gumbo as a uniquely Cajun/French food and downplay its varied origins. I ended that keynote with what I hope was an impassioned plea about the importance of remembering and invoked the National Memorial for Peace and Justice‚Äôs opening. Remembering to foster inclusive belonging.

One powerful way to remember is the practice of opening public events and gatherings with acknowledgement of traditional Native inhabitants of the land. In New Orleans, Paper Monuments, uses public art to honor erased histories.

How do you remember? How do you foster inclusive belonging?