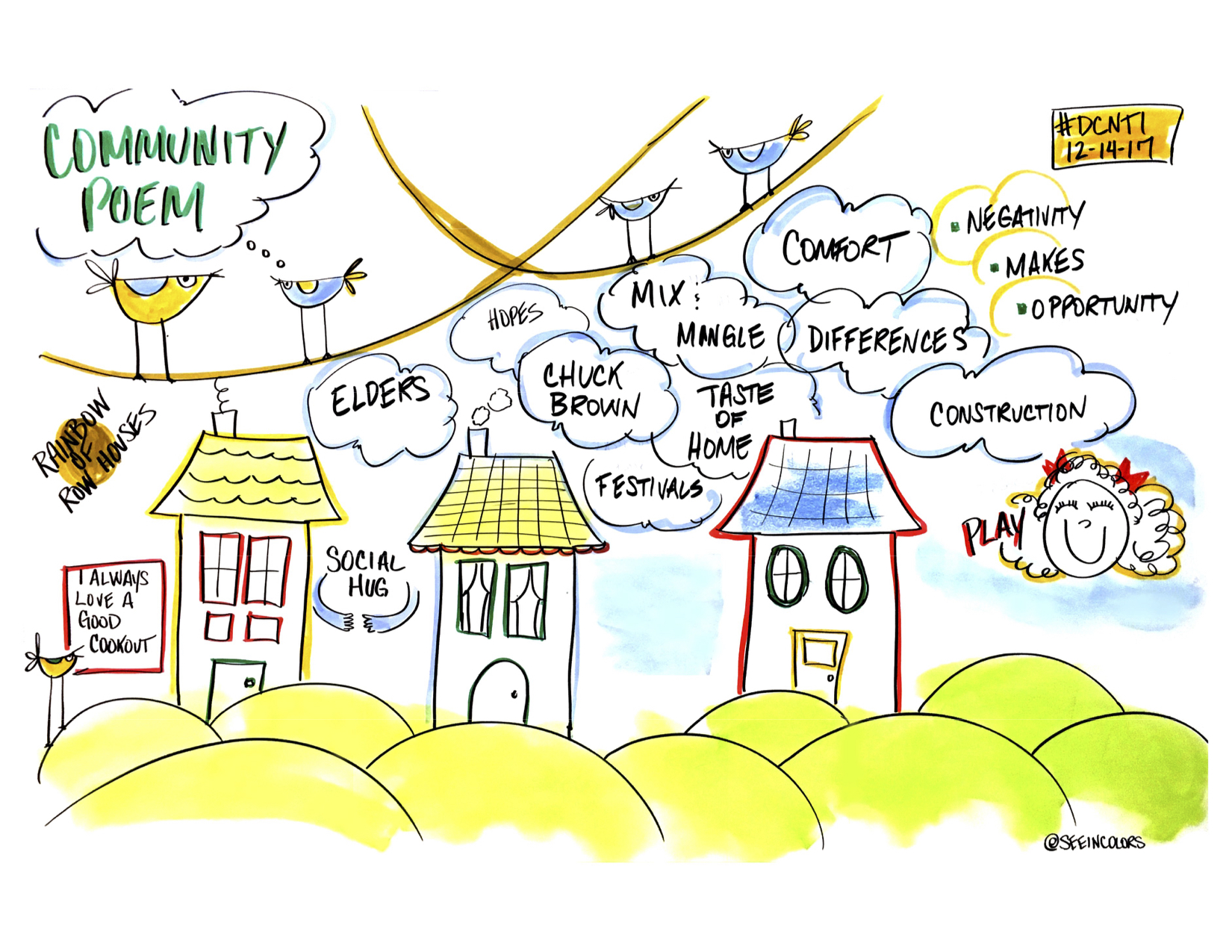 Illustration of the community poem from Lisa Nelson, of See In Colors.

Community is a block party where everyone is invited. Bring your best dance moves, your favorite food.

This is the first line of the ŌĆ£community poemŌĆØ that artists Holly Bass and Maryam Fatima Foye performed to close a convening in a nondescript conference hotel ballroom in December, 2017. ItŌĆÖs called a community poem because Holly and Maryam didnŌĆÖt write it themselves. Each person at the convening contributed one line. They were told to think of their ideal or current community and respond to one of the following prompts: ŌĆ£My community looks likeŌĆ”,ŌĆØ “My community tastes like…,” ŌĆ£My community smells like,” “My community sounds likeŌĆ”” Then Holly and Maryam assembled the lines together in a poem. People in the room began to expect the refrain:

Holly didnŌĆÖt just arrive at the ballroom to perform a poem. She was an integral part of the Metris team that planned and facilitated a day-long convening with recent Metris client, NeighborWorks America. For over a year, Metris supported NeighborWorks in a planning process to surface how its national network of nearly 250 affordable housing and community development organizations currently use arts and culture to achieve their community development objectives. With this information, we then identified ways NeighborWorks can best provide support for this work within their network and beyond. WeŌĆÖre thrilled that NeighborWorks recently released the culmination of this work: Creative Community Development: Final Report.

But weŌĆÖre not writing this blog post to celebrate the final reportŌĆÖs release. In this post, we reflect on how we worked with three artists to bring innovation, creativity, and fun to the NeighborWorks planning process. Through our collaborations, the artists also modeled ways community developers can partner with artists to deepen and enhance community engagement. LetŌĆÖs rewindŌĆ” before we even got to the community poem, we worked with two other artists earlier in the project that informed our collaboration with Holly.

We kicked off the project in Minneapolis at NeighborWorksŌĆÖ huge National Training Institute. Twin Cities-based artist, Mankwe Ndosi, supported NeighborWorks during a day-long meeting of over 100 people. In one of our small group exercises, we introduced ourselves with the prompt, ŌĆ£I come from people whoŌĆ”ŌĆØ (For example, the introduction I gave included, ŌĆ£I come from people who left Ireland during the potato famine; from people who pursued careers in rural Nebraska; from people who are teachers.ŌĆØ) This exercise invited us to be vulnerable and show our complexities as people who carry our ancestors with us. It made power dynamics explicit, for instance that some participantsŌĆÖ ancestors were enslaved and others owned slaves. Another way Mankwe contributed to the meeting was humming and singing to get our attention, as we transition from small group activities back to the large group.

Metris came on board after NeighborWorks had planned much of the meeting. From Mankwe, we learned about the value of engaging artists at the beginning of planning an event. This way, they can act as thought partners and bring so much more than ŌĆ£icing on the cake,ŌĆØ (such as an engaging and inspirational opening or closing performance), as Mankwe put it.

Next, we planned a mid-project retreat in Kansas City, MO for the nearly 20-person project steering committee. We took MankweŌĆÖs advice and put out a call for a local ŌĆ£artist/facilitatorŌĆØ at the very beginning of retreat planning. We envisioned that the artist┬ŁŌĆövisual or performingŌĆöwould integrate creative practice throughout the meeting. The overall objective was to raise the bar, in terms of thinking, among retreat participants and have fun. We decided to work with Julia Cole. As we planned the retreat together, Metris knew what we needed to get out of the retreat and Julia helped us think through how weŌĆÖd get there. 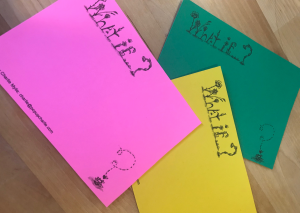 A highlight of working together was using ŌĆ£What IfŌĆ”?ŌĆØ cards designed by Charlie Mylie, a local illustrator that Julia knew. During small group share-outs, people responded to what they heard from their peers by jotting down questions, ŌĆ£ah haŌĆØ moments, and reflections on colorful cards with the prompt ŌĆ£What IfŌĆ”?ŌĆØ Then, we invited folks to deliver their cards to the groups and engage in a conversation about what they had written on their cards. This exercise encouraged people to listen carefully and let their mind wander through possibilities, no matter how big or small. It also helped the people who received the cards explore new avenues that they might not have thought of, otherwise.

And┬Āthen that brings us back to Holly. She provided invaluable insights as we planned the final convening with more than 70 community developers, local government staff, artists, and creative placemaking funders and researchers. Holly also presented three brief arts performances during the event. The biggest hit? When Holly, Maryam, and Kokayi Issa took convening participantsŌĆÖ ideas related to community development and freestyled short Hip hop pieces. We also worked with graphic recorder, Lisa Nelson of See in Colors, to graphically document the day-long meeting. 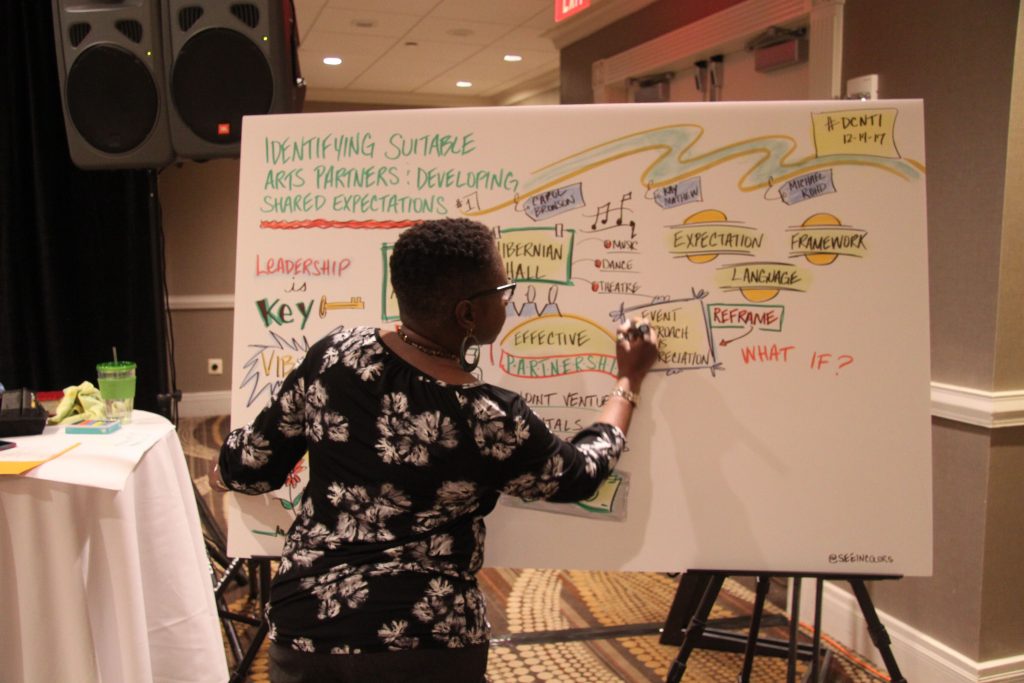 NeighborWorks continues to work with artists, as described in their recent blog post, ŌĆ£Artists and community-development nonprofits: how to make the match work.ŌĆØ And in multiple project proposals weŌĆÖve submitted since working with Mankwe, Julie, and Holly, weŌĆÖve budgeted money to collaborate with an artist who can help us plan and facilitate parts of the project. WeŌĆÖre excited to continue learning how to work with artists and see how their contributions make our work better.

We are all humans that experience the joys and hardships of life. Community allows us to not be alone in all of it.┬Ā

This entry was posted in Artist Facilitators, Creative Placemaking, Postcards from the Road. Bookmark the permalink.